censura de "this is the end, beautiful friend" 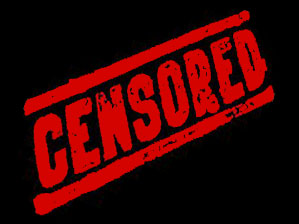 recording the silent final grooves of records. not so silent after all. playing them loud enough to capture the hiss, the pops, the clicks. adding a couple of digital delays, some EQ and filtering, a little reverb here and there… not much, really. it’s all in the records if you know where to listen.

of course it is difficult to listen to these grooves with automatic return turntables (stupid consumer-oriented machines). maybe that’s why you never paid attention.

you will probably have to raise the volume to play this album, which will add a little electronic hum, different with every equipment on which you play it. this is a (nice) feature, not a bug.

if you have the means, stamp these tracks on a three sided LP. you will have three free extra end grooves, and a blank side to needle-surf.

one last thing. probably some people will think this is not legal, i should not be allowed to do this, i am stealing somebody else’s copyrights (john cage’s?), etc...

nevermind, most people will just think this is not music.

THE BEGINNING, ACTUALLY The Doors “The Doors” (Elektra, 33 rpm, side B, 500-71SB1). This is the end, beautiful friend, of The Doors first album. And it is the beginning of mine, which is not the first, anyway (but is the last so far –at the time of writing this-, of course). What a coincidence.

FAVORITES John Coltrane “My Favorite Things” (Atlantic, 33 rpm, side A, ST A 60303 D). Well, yes, let’s admit it, these are some of my favorite records. That’s why I chose them.

AND WHO GIVES A SHIT Negativland “U2 – 1991 A Cappella Mix” (SST, 45 rpm, side A, SST272A). As you all know, this record does not exist. All copies were destroyed after Island/Warner sued Negativland. Everyone who had received a copy of the record -reviewers, record stores, radio stations, etc.- was notified to return it. (If they failed to comply, they might be subject to penalties which might include imprisonment and fines). Once returned, the records were forwarded to Island for destruction. Nevertheless, this track has been recorded from one of the remaining copies of the original 1991 SST edition. Thanks, Vicenc and Esther!

LET ME DIE IN YOUR FOOTSTEPS Christian Marclay “Footsteps” (Rec Rec Music, 45 rpm, 26A-LC7981). Christian is one of the guys who taught us how to listen to records. When I got this record, it was SO dirty I did not dare to play it for a while, afraid it might damage my precious equipment. It probably did, and probably that was what it needed.

THRILLERPHONICS Michael Jackson “Thriller” (EPIC /CBS, 33 rpm, side A, 85930A). Free samples, blank tape is derivative, nothing of itself, the commerce of noise, chimeras of sound, starting from scratch, the medium is magnetic, aural wilderness, the buzzing of a titanic bumblebee.

MAGIC The Magic Record Album (Atlantic Records, 78 rpm, parallel grooves, side A, 114-A) Double 10-inch record with parallel grooves. It plays a different story each time, in total 256 different stories! You don’t need to wait for the final groove to get some randomness, but you can still do. It depends on what you are looking for.

HIGH FIDELITY Popular Science Monthly “Testing Vol. 2” (Urania, 33 rpm, side A, UPS-2B). This 1957 LP is subtitled “True Sound Of Musical Tones” and is supposed to “prove your system’s true high-fidelity”. By the way, the Urania label made some of the best cover art ever.

PARTY v.a. “16 Tours Super Party vol. 2” (Ducretet Thompson, 16 rpm, side A, 620V003A). I always wondered what was the use of the “16 rpm” position in a record player until Anton Ignorant gave me this record. If I remember well I gave him a Spanish-Russian dictionnary in exchange.

SEX MACHINE James Brown “(Get Up I Feel Like Being A) Sex Machine” (Polydor, 45 rpm, side A, 2001071A) We all know what the late great J.B. tought of people who sampled him: he sued them. And probably there is someone who still does. It is interesting to note that, since the complete Sex Machine track spans over the two sides of this single, what I recorded (end of side A) is actually in the middle of the song.

MOI NON PLUS Jane Birkin & Serge Gainsbourg “Je t’aime… moi non plus” (Golden 12, 45 rpm, side A, G12/88A). A masterpiece too frequently mistaken for a novelty record. Years ago we used the piano part in a song. Later I used part of the lyrics in another. Why should’t I use the final silent groove now? By the way, this is the german edition of the single.

NAME THAT TUNE Name That Tune Game (Milton Bradley Co.,33 rpm, side A, TV26965-1A). This game is a music bingo. One player is the “disk jockey” and plays the record randomly. The other players receive a card each with song names and have to guess the tunes. The first player to complete a row (five tunes) on his card wins the game. I guess they never guess this one.

HOWLIN’ WOLF Serge Prokofiev “Pedro y el lobo” (Philips, 33 rpm, side B, P13168 2L). This record belonged to my parents. I liked it when I was a kid, but I find the drawing of the wolf so scary I could not even look at it. Sometimes I am still scared if I hear the Peter And The Wolf tune unexpectedly.

VIOLINS Mendelsohn/Tchaikowsky “Concert(s) for Violin and Orchestra” (Club Internacional del Disco, 16 rpm, side A, CID-301614-A-1) Another 16 rpm record. I was missing some classical music in this collection.

FLY ME TO THE MOON Conquest Of Space (BriTone, 45 rpm, side A, MK100EP/BM7453). This is a historical documentary record of the first manned space-orbit flight by Major Yuri Gagarin, a 1961 british edition of the USSR recording. The original sound recording has so many crackles, and the actual record is so used (by my parents on a merciless 60s portable player) that I could have recorded any part of the record with the same effect.

HELLO DOLLY Doll Record no-25 (Jesmar, 115 rpm, parallel grooves) This 2-inch doll record was a present from Ajo. It is so small that I had to buid a special adapter to be able to play it. And it should have played a little faster (maybe around 120) but I could not spin that fast.

AGAIN Criminal Element Orchestra “Put The Needle On The Record… Again!” (BCM Records, 45 rpm, side B, DM-C0397B). It would rather be “don’t take the needle out of the record” but it’s ok if you put it back.

TYPEWRITING La Garde Républiquaine de Paris. “La Nouba - Marche Afriquaine” (Gramophone and Typewriter Ltd. And Sister Companies, 78 rpm, 30009X) This one sided shellac disc is the oldest record in this collection (probably dating from around 1905). In it, the French “Garde Républiquaine” band is trying to play an african rhythm. They miss the spot, at least from a XXIst century point of view, but they play a strangely relaxed repetitive rhythm which turns out to be quite beautiful.

SI LOS CURAS Marcos Redondo con banda y coro. “Himno de Riego” (Odeon, 80+ rpm, side A, 184238A). El Himno de Riego has been the national anthem of Spain during the Trienio Liberal and the First and Second Spanish Republics. It was banned during the Franco regime and we used to sing it clandestinely.

HORSES “They’re At The Post” (Homestead Records, parallel grooves, 33rpm, 1011). This is a phonofinish” game record. Eight parallel grooves play a horse race with the same start and eight different ends. You are supposed to bet on the outcome. But my bet is that the record has just one end (er… I mean one on each side; this is the end of side one)

TAKE ME TO THE MOVIES Red Raven Orchestra “The Little Red Engine” (Red Raven Movie Records, 78 rpm, side B, M-2). Red Raven Movie Records are special children's records with a 16-frame animation printed right onto the disc. When played using a phenakistoscope placed atop the phonograph spindle, they display a moving cartoon.

LOOK MA NO HANDS unknown artist (home recording on a self recordable Recordio Disc, 78 rpm). You never know what you can find in these old recordio discs, from a time when people recorded their own records at home (at least, some people did).

PINK REMEDY Trio Las Pulguitas “El buen remedio” (Discos Calesita, 78 rpm, side B, CA24B). Argentinian label Calesita released a series of colored kiddies records, and they are the most beatufil colored records I have ever seen. This one is fleshy pink.

EGO Macroelvis Supermassa “XVIII El Sol” (G3G, 45 rpm). I figured I should use one of my own records too. Maybe I can sue myself if I need to. By the way, this is a limited numbered edition. I used the end of side B of number 61/497. Which makes a great difference.

BONUS TRACK Ekül B. “Musique Plastique” (Beta-Lactam Ring Records, lathe cut, copy 32/50) We are not playing a silent groove but the real thing on this one.

WHIP ME, CHRISTY (PARTS I, II & III) Evolution Control Committee “The Whipped Cream Mixes” (Pickled Egg, 45 rpm, side A, AH14331A). Grand finale: I allowed myself a little improvising with my fingers on the turntable on this one.